In his post about a Telegram bot Joachim Breitner mentions compiling his program into a static binary to have it run in Amazon’s version of Linux without needing to build it inside a container. I was interested in experimenting with Amazon Lambda and having statically linked Haskell programs sounded like a great idea too, so this is a write-up of what it took to get those things working.

In the end we will have a Haskell program compiling to a statically linked binary, being built quickly by making use of Nix and Cachix and automatically deployed to Amazon Lambda using GitHub Actions.

The code for this post can be found at lazamar/lambda-haskell.

In Lambda we need a special wrapping layer to run Haskell code. I’m using aws-lambda-haskell-runtime for that. I wanted to see what data from the request Amazon was making available, so the program will simply get a request as a JSON, prettify it and return that. This is Main.hs, the only Haskell file.

We can build that with Cabal and a small lambda-test.cabal file.

To statically link our Haskell program I used Nix and made use of the excellent static-haskell-nix project.

They created a nix file that modifies all existing Haskell packages in Nix to have them and all of their dependencies be statically linked.

They also keep a list of packages that do not successfully compile with this approach. It works with more than 90% of Stackage.

I used Niv to pin the Nix derivations I was using to precise commits. This is great to make sure that my build will be exactly the same even if I’m on a machine with a different revision of nixpkgs or if the derivations I use are updated.

Adding a package with Niv is super simple. Just niv add nh2/static-haskell-nix will pin a version of static-haskell-nix in a json file under the newly created nix directory and by adding two lines of code at the beginning of my Nix file to load the Niv sources I can use it with sources.static-haskell-nix.

To have all of the modified Nix packages I import sources.static-haskell-nix + "/survey/default.nix". After doing that I found that the project is pinned to an old revision of nixpkgs and I needed a more recent one for callCabal2nix (it goes into an infinite loop in the pinned one). To override it I pinned my desired revision with niv add NixOS/nixpkgs -a rev=<sha256> and used it by setting the normalPkgs attribute with this line:

I use cabal2nix to transform my Cabal file into a Nix derivation.

callCabal2nix is a convenience function that allows us to use cabal2nix without needing two nix files (the converted-to-nix cabal and the actual build instructions). I can just have the nix file with build instructions converting our cabal file to nix on the fly.

callCabal2nix gets the sources it will use as input. Usually I would just pass the entire directory to it. However, whenever I run nix-build the result gets compiled to the result subdirectory which means that there was a change to our sources and things will be rebuilt the next time I run nix-build again. That’s not very smart. It is not true that everything in the repository is source code. Actually only things tracked by git are real source code and it would be smarter if only those files were taken into consideration. And that’s exactly what hercules-ci/gitignore.nix does.

Finally I use the overrideCabal function to make sure GHC will use statically-linked everything.

With all of that in place I can run nix-build --attr lambda-test default.nix and after a few hours of downloads and compilation I have a binary under result/bin/lambda-test.

I can confirm that this is not using any dynamically linked libraries like so:

For this to work in Lambda I need to rename it to bootstrap and provide it wrapped in a zip file named function.zip. I copied Joachim Breitner’s Nix snipped to automate that in function-zip.

Now I can run nix-build and inside the result folder there will be a function.zip. This is the file I will upload to Lambda further down.

Building it once took very long. Thankfully Nix reuses that and it will be rather quick to rebuild this code in the same machine. Nonetheless, whenever I want to build it somewhere else the process will start again.

To avoid that I use Cachix, a content-addressed binary cache that will allow me to share the compilation work I do locally with other machines.

I wanted to use my cache as well as the static-haskell-nix cache.

Now I just needed to make sure to upload my results whenever I built the project.

Voilà. Now I don’t have to go through hours of compilation when moving machines. And most importantly neither does CI.

Amazon Lambda allows you to deploy a server that is off most of the time and wakes up only when a request arrives. This is great because you don’t need to pay to keep it running all the time, you only pay for the small bursts of activity.

There are ways to use it with various languages, but for Haskell I can use aws-lambda-haskell-runtime and just provide a binary inside a zip. Pretty simple.

For instructions on how to create a Haskell Lambda you can follow this guide.

When I created a Lambda in Amazon I found out that it can’t automatically talk to the world. To do that I needed to add an API layer to the set-up. That would allow me to talk over HTTP.

I added an API Gateway layer and configured it as a proxy. That gave me a URL to query my service. After uploading the zip I could see the prettified JSON response as expected.

This is where the upload zip button is hidden: 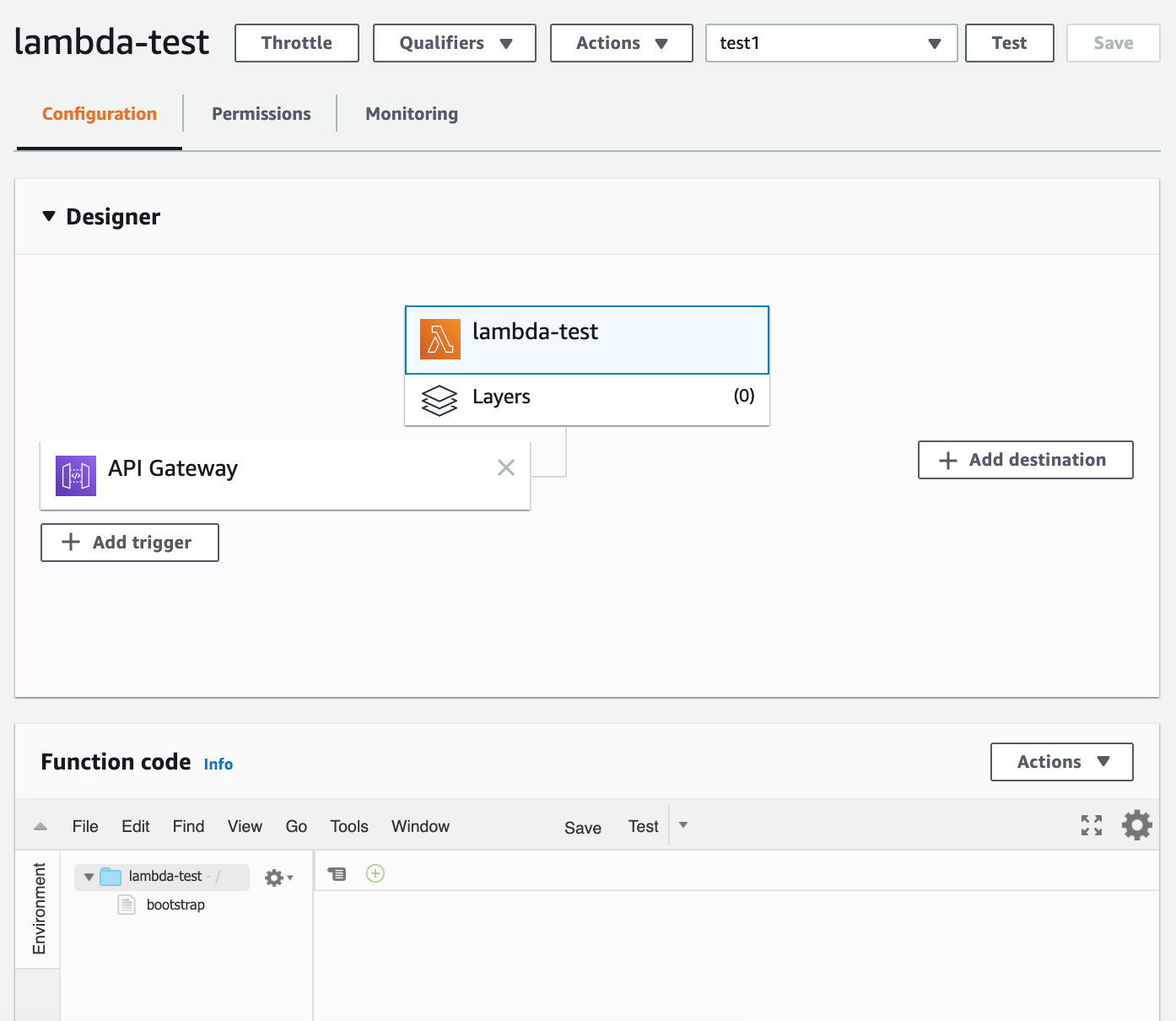 The last step remaining is having the code automatically built and deployed to Lambda every time I push a commit to GitHub.

I created a workflow and enabled GitHub Actions by adding .github/workflows/ci.yaml to the repo. And that file looks like this:

This is a workflow that will be triggered for pull requests and pushes to master and contains 8 steps.

Those secret variables you see are set in https://github.com/<user>/<project>/settings/secrets. You can read more about handling them here.

This concludes the full set-up. With that I have code quickly compiled to a statically-linked binary in CI and automatically deployed to Amazon Lambda on every push.