TL;DR: There is no Nix-native way of doing that. In this post I describe the process that led to the creation of Nix Package Versions, the tool that provides this functionality.

The Nix package manager allows one to easily install and remove different versions of the same package. With nix-shell one can even start a shell environment with a different version of a package that is already installed.

This is extremely useful and one of Nix’s killer features.

Some time ago I noticed that my version of Neovim had a bug. This seemed like an easy fix, I just needed to install a previous version of the same package.

Searching locally with nix-env -qa neovim revealed that my revision had only one version of the package, which was the same as the one available at https://search.nixos.org/packages. After some more research I discovered that there is currently no Nix-native way to search through previous revisions for older versions of a package. In fact there is a very long discussion spanning multiple years about how to do that and whether it is suitable for the package manager to provide such functionality.

So what to do?

A first approach to a solution

What I really want is to look through older revisions and check what version of Neovim they have in the hope that they would have an older version of it. I could then tell Nix to install it from that old revision.

Given that one commit is equal to one revision, to find a revision containing an older version of Neovim I can look through the git history of that repository searching for changes in the version field of the neovim derivation.

Searching for neovim at https://search.nixos.org/packages I can see that the nix expression describing it lives at pkgs/applications/editors/neovim/default.nix.

So I started by cloning NixOS/nixpkgs-channels and using git rev-list to find all commits that modify that file.

I could then use git grep to check if the line containing the package version was changed.

I can use xargs perform one git grep search per commit in git rev-list, this way I will effectively have a list of all commits where the version of neovim was changed.

Success!! Now I can just choose the version of neovim I want and open a shell with it by specifying the revision’s commit address on github.

Even though this worked, it was not pleasant.

I expected a good solution to be similar to the official Nix package search website. A page with one search box where you enter the package you are interested in and get a copy-pasteable command to install it. So I started with that as the goal.

I initially thought of setting up a server with a clone of nixpkgs-channels that would perform this git search every time someone made a package query. It soon became obvious that this was too error-prone and would not scale.

I discovered that nix-env -qaP --json outputs a big json file containing information about all packages available in your default revision. You can specify a different revision by using the -f flag. Using this I could find out information about packages in any revision reliably. This command takes some time to complete, but I can save its result in a cache and query the cache instead.

But I can’t cache everything. Not only do we have one revision per commit, we also have multiple channels. Each channel is a branch in the repo. It is not feasible to store information about every single commit from every channel. To simplify things I save data for one revision from each channel for every 5 weeks period. This seemed like a reasonable interval as most packages don’t have new versions more often than that.

After a few hours gathering data from 2017 until now the database ended up containing information about 1,993,997 package versions spanning 1,032 revisions. This amounts to 542Mb which I store in an SQLite database to keep things simple, fast and portable.

With the data in place all that remained was building the UI and setting up a cron job to update the database every so often.

One can now search for old package versions at https://lazamar.co.uk/nix-versions/ 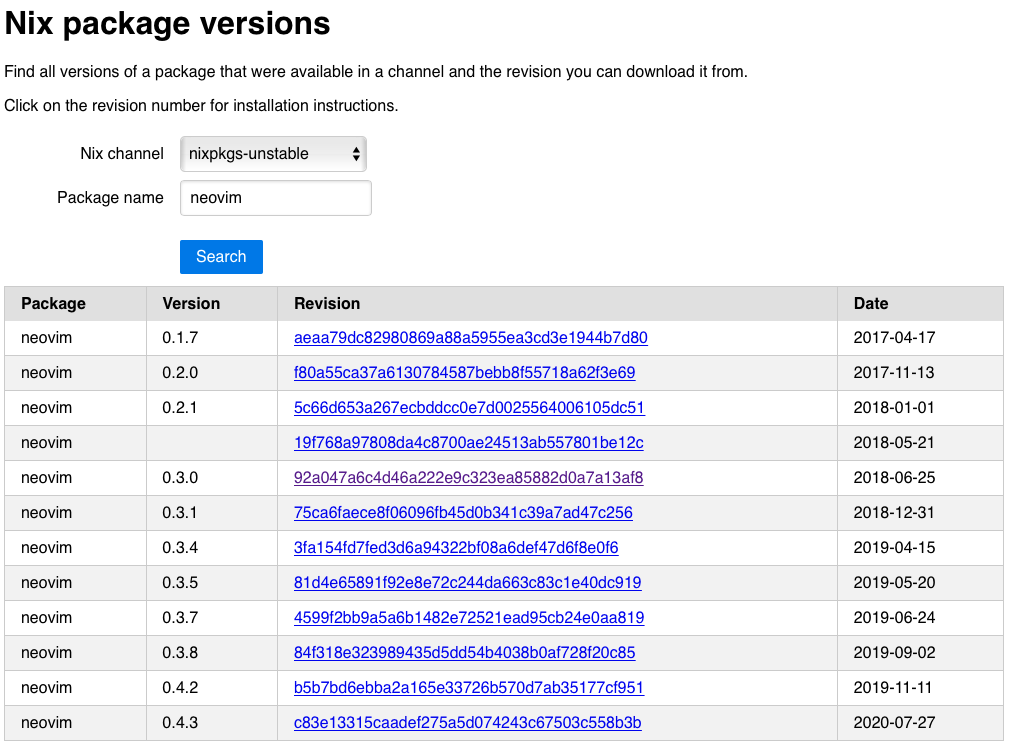 And it gives copy-pasteable installation instructions for using it in the command-line or in a nix derivation. 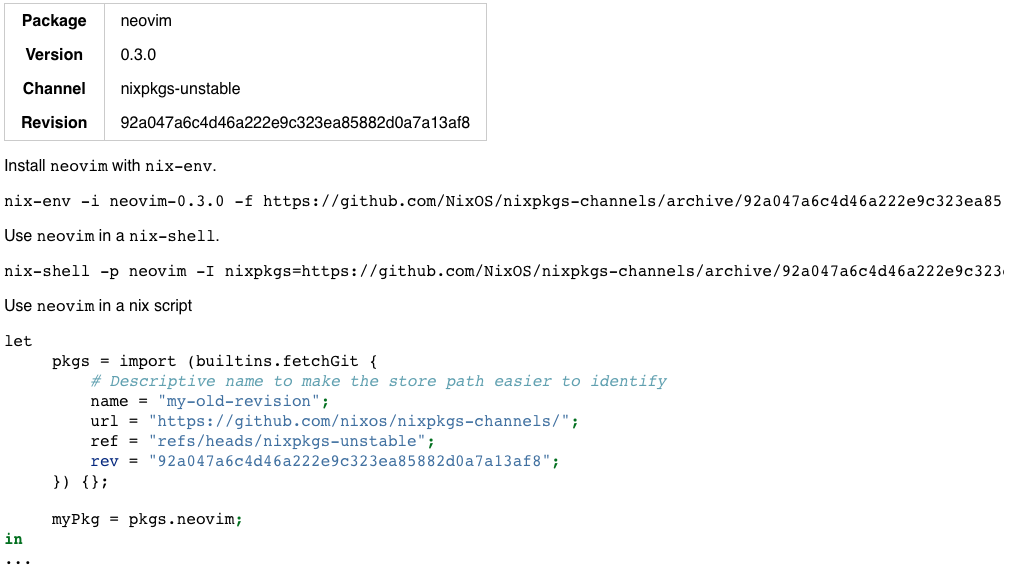 The tool is open source and the code is available at https://github.com/lazamar/nix-package-versions

Nix revisions specify how a package is to be built, but actually building it may take a very long time, especially if you are also building everything that it depends on. To avoid that Nix servers keep the pre-compiled binaries of packages in recent revisions and make those available for download. Your system will automatically choose to download the binary if it is available instead of building the whole thing.

When you are installing things from older derivations you lose that benefit and your build times may be much longer.

Additionally, if a package has releases more often than every 5 weeks, a version may be missed.

Given that easily handling package versions is such an important feature of Nix I hope that in the future this functionality will be built into the package manager.